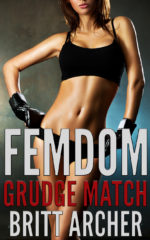 Nora is having one of the worst days of her life. Not only did her boyfriend dump her, but he also stole the rent money before he took off. What she really needs now is to step inside a boxing ring, and blow off some steam.

But before she gets the chance to go a few rounds, her ex-boyfriend, Jeff, shows up at the gym and tells her that he’s in deep with his bookie. She senses an opportunity for revenge, and offers to give him the money he needs – if he can beat her in a fight.

Jeff agrees to fight her, but has no idea what he’s getting himself into. Before Nora is done with him, he’ll be beaten, humiliated, and dominated in the most twisted ways imaginable.

“I’ll just go, and never bother you again,” Jeff said, staggering to his feet. His footfalls were still unsteady, and he looked like he would keel over at any moment.

“Maybe I don’t want you to go. Maybe I want some more payback first.” I took a menacing step towards him, and laughed when he flinched away. “I have no idea what I ever saw in you. You’re pathetic.”

“Should I humiliate him?” I asked in a louder voice. This was greeted by a chorus of cheers and clapping. I turned to Jeff and grinned. “I have to give the audience what they want.”

“You’re all crazy,” he said, looking around wildly.

“Maybe,” I replied, “but if we are, it’s because men made us this way.” The time for talking was over, and I was itching to hurt him again. I opened my stance, and approached him cautiously. Usually, when an animal is cornered, it fights the hardest. But all the fight seemed to have gone out of Jeff, and he only tried to keep away from me.

“This is stupid,” I sighed. “Stop running from me like a little sissy.”

He started to respond, and I lunged for him, catching him by surprise. I grappled with him, and he lowered his head and tried to wrap his arms around me. It was a big mistake. I looped my arm under his neck, and locked it with my other arm, and started to apply pressure.

By the time he realized that I was choking him, it was too late, and his pawing at me slowly became weaker. Just when he was about to collapse, I released the pressure, and listened to the sound of him desperately sucking air back into his lungs.

Before he could recover, I kicked out with my foot, and swept him off his feet. He landed hard on the mat, and lay there motionless, gasping for breath. I put my foot on his chest, and playfully flexed my bicep for the women watching. The fact he wasn’t even making an attempt to push my foot off, showed me just how defeated he was.

I decided now was the time for me to have some fun with him. It only took a small shift in my weight, to move my bare foot from his chest to his mouth. “Kiss my foot, and show me that you submit,” I purred, in a sexy voice.